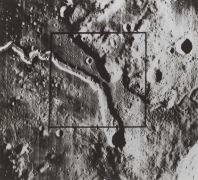 The area shown in this wide angle view of the lunar surface is site V-49, Cobra Head. Surface feature detail as small as 75.5 feet across can be seen in the original of this photograph. This frame is part of the 4-frame sequence of this are taken by Lunar Orbiter V Aug. 18, 1967. Four of the corresponding telephoto frames were mosaic to form a 5 by 5 foot panoramic view of that portion of this photograph which is outlined in black. Surface features as small as 9.5 feet across are visible in these mosaics. These photographs are an improvement over previous Earth-based lunar photography and are expected to provide scientists with valuable information regarding the geologic structure and probable origin of the Moon. The coordinates of the center of this photograph are approximately 25º06 S latitude and 49º30W longitude. Lunar Orbiter V was at an altitude of 82.5 miles when this photograph was taken.

The Lunar Orbiter Project is managed for the National Aeronautics and Space Administration by Langley Research Center Hampton, VA. The Boeing Company, Seattle, Wash., is the prime contractor.