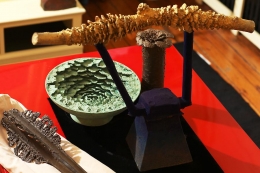 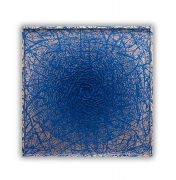 In addition to the highest quality decorative arts of the late nineteenth and early twentieth centuries, Jason has also been quietly collecting work by a select group of contemporary artists. This season we proudly introduce Martin Kline's breathtaking paintings and bold sculptures. Kline's works are already in major institutional collections including the Metropolitan Museum of Art, the Brooklyn Museum, and the Whitney Museum. We are currently running a special Kline exhibition that will be open until the end of January 2010. Martin Kline's paintings, rendered in richly-hued encaustic (colored wax), are composed of mysterious three-dimensional outcroppings so tactile that they demand human touch. The work investigates duality in its explorations of energy and stasis, simplicity and complexity, immediacy and timelessness. Kline uses muscular almost balletic gestures in huge circular turns or bold zig zag vectors to create his images, yet as images they appear nearly frozen in time, alluding at once to immutable geological strata or examples of petrified tree lichen. A random paintbrush bristle here or there adds an unintended biographical quality that returns the observer from the reverie of meaning to the materiality of wax. In its kinship to the ubiquitous box of eight thick kindergarten crayons, the material reminds us that the simple pleasures of childhood eventually grow into to the challenging complexities of the adult world. And like a strong inscrutable personality, wax resists blending and subtlety, winning you over with its opaque, mystifying qualities.

Kline's metal sculpture has a similar effect. Iconic yet innocent forms such as tree branches or baseball bats are transformed, becoming (in a given example) the core of a work that might gush blood-like wax or sprout threatening metallic flanges. Cast from wood and wax, the sculptural pieces in a sense represent the final stage of immutability that begins with the wax image. If one imagines the wax as nearly frozen in time, the bronze is the essence of permanence. Each casting becomes a surreal monument to nature, growth, and art.

We are pleased to report that our Martin Kline show was favorably reviewed in the New York Times on December 3, 2009. A copy of the review appears on our website under News. If you would like any further infomration please email info@jasonjacques.com. 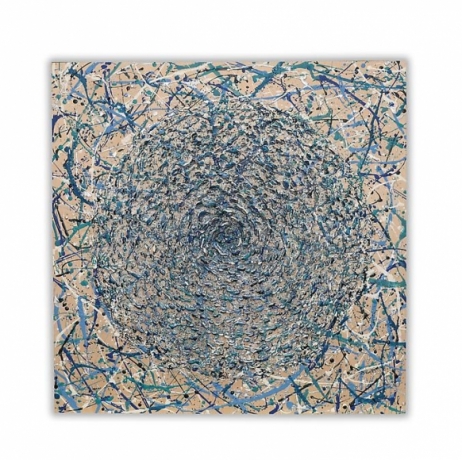