NEW YORK, NY.- Jason Jacques Gallery announces that Das Werk: Gustav Klimt Collotypes and Avant-Garde Austrian Art Pottery, an exhibition that combines rare collotype prints by Austrian artist Gustav Klimt with Austrian Art pottery from the late 19th through early 20th centuries, will open on July 6 and run through September 1, 2017. The exhibition presents color prints from Klimt’s Das Werk series, which includes some of the artist’s most iconic masterpieces, such as The Kiss, Judith I, and Emilie Flöge.

In 1908, Klimt and Galerie Miethke in Vienna planned the publication of collotypes under the name Das Werk Gustav Klimts, a project that aimed to distribute his work to select collectors and clients. From 1908 to 1914, Klimt personally supervised the 50-print enterprise, which faithfully reproduces Klimt’s most important paintings from 1898 through 1913. Klimt designed a unique signet for each print, which was placed beneath the image and impressed in gold ink. Emperor Franz Joseph I of Austria was the first to own the initial installment.

Klimt’s collotypes are paired alongside a selection of important Austrian ceramics from the turn of the 20th century, with an emphasis on masterworks from the ceramic workshop of Riessner, Stellmacher, and Kessel, known as Amphora. They date from 1894 to 1904 and constitute some of the best examples produced during that period, featuring fauna and flora inspired designs, simulated jewels, and Klimt-inspired compositions. Located in Turn Teplitz, Austria (now part of the Czech Republic), Amphora was founded in the 1890s and employed some of the most talented ceramists of the period, including Alfred Stellmacher, Eduard Stellmacher, and Paul Dachsel. Their exceptional abilities as skilled technicians and designers contributed to the development of a unique genre of art pottery associated with the Jugendstil movement.

“This exhibition carries me back to my early days when Teplitz ceramics were the roots of my gallery during my time in Vienna in the early 90s,” says Jason Jacques. “I feel as if I've come full circle to that time through the exhibition today. And having the complete portfolio of Das Werk Gustav Klimts as part of the exhibition is particularly gratifying.”

In the same manner that Klimt incorporated design and ornamental elements into his two-dimensional paintings, Paul Dachsel and Amphora artists took stylistic inspiration from painting and sculpture in order to radically transform pottery into an art form of its own. Das Werk seeks to reconsider the intricate relationship between painting and the applied arts during the Austro-Hungarian Belle Époque.

The Jason Jacques Gallery is located at 29 East 73rd Street in New York. 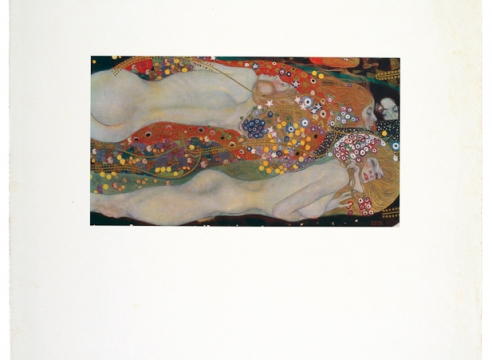